Alumni giving is a vital source of revenue for higher education organizations but it’s also an increasingly difficult landscape to navigate. According to the 2012 Voluntary Support of Education survey carried out by the Council for Aid to Education, less than 10% of reachable alumni contributed to their alma mater last year.

Despite these figures, many universities and colleges are still relying on offline methods such as direct mail as the main way to target alumni while still using online channels as a means of communicating information.

Imagine, however if there was a way that your university could increase their yearly alumni donations by 500% in just 24 hours using these online channels. Well, that’s exactly what Columbia University set out to do on October 24th 2012 with their inaugural online Giving Day.

Columbia’s by now infamous campaign succeeded in raising more than $6.8 million in fundraising on the first Giving Day.  The following year, on their second annual Giving Day, the university proved that lightening can strike twice when they received gifts of over $7.8 million for the university and its programs. 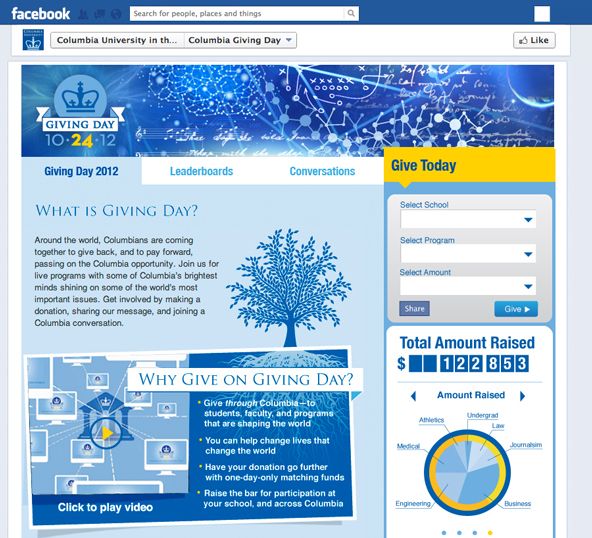 You may be wondering firstly, just how they achieved this and secondly, could you replicate a campaign like this for your institution?

You might be surprised to hear that Columbia’s Giving Day didn’t involve the use of magic, voodoo, or trickery and at its very core, consisted of three simple but essential facets that when followed can readily be applied to any alumni campaign.

The three steps to Giving Day success that any higher education institution can follow:

It’s a well known fact; people trust a friend’s recommendation over just about anything a faceless institution or retail company could tell them. The proof of this is in the statistics; 55% of all traffic to the campaign website was referral traffic as opposed to organic traffic. Columbia University recognized the value of tapping into the networks of existing donors and worked hard to identify, engage and train their team of online ambassadors to go out and spread the word about the campaign. Making smart use of software like social toaster can also help significantly increase donor numbers.

Columbia hired a vendor to build the campaign giving websites, apps and widgets thus ensuring that alumni givers had as many access points as possible to the campaign. Story, the chosen vendor, developed a digital strategy that would harness the power of social media to spread the message of giving through Columbia as opposed to merely giving to Columbia and in doing so encourage givers to “change the lives that change the world”. In order to create the idea of a unified brand across several colleges within one university, a content hub for Giving Day was located on Columbia’s Alumni facebook page which included links to a donation site, Twitter feed and YouTube channel, containing 24 short films.

3.       Invest in personnel to manage your social media strategy

Social media really does work but only if you understand how to use and manipulate it to suit the needs of your campaign. CloEve Demmer and Gwynne Gauntlet, two of Columbia’s staff responsible for Giving Day have spoken about how when planning the campaign, they designed the messaging of each channel to suit the needs of their particular users. Knowing and inherently understanding the needs of a particular channel’s audience can help you pre-empt what content is going to get the greatest levels of engagement.

In addition to the huge success Columbia achieved with the 24 hour giving day, several million additional dollars were given to the university by alumni and supporters who were inspired by the provocative campaign.

It’s worked for them and it can work for you.