When you work in marketing you can spend months planning and creating the perfect campaign. You can write the best script, hire the best videographer and then plan the perfect promotional strategy and it can fail to land. It can be nearly impossible to predict what's going to be a hit with your audience let alone to predict what content has the potential to go viral.

Video content offers your university the opportunity to connect meaningfully with your audience and to build engagement among your followers. People are always wondering what the secret formula that makes videos go viral is but really they should be asking what will make people want to share this. Over the years, we have noticed that people share content when it means something to them or when there’s something valuable in it for them. When creating content it can help to ask yourself, why would someone share this? Content that isn’t original or interesting and is largely self-serving isn’t going to make someone want to tell their followers about it.

When creating content it can also help to work with influencers that can help get your content out to a bigger audience. Most videos go viral when an influencer shares it – their followers share it and the video spreads fast.

Sometimes a video will just make your audience smile and they want to spread the joy – this is exactly what happened to Colorado State University recently. On the 7th of November they shared a video titled 'Love at First Frost' which featured a sweet golden retriever trying to catch falling snowflakes in his mouth.

As of early December, the video was shared to their 178,658 followers on Facebook where they typically get about between 1-2k interactions per post. So what kind of interaction did the snow dog video get? Ok, so hold onto your hats. So far their cute little video has reached over 13 million people, been viewed over 6.8 million times (a big jump from the initial 4.2 shown below) and had almost 700,000 reactions, comments and shares.

Here are the more detailed stats from November, and they are still climbing: 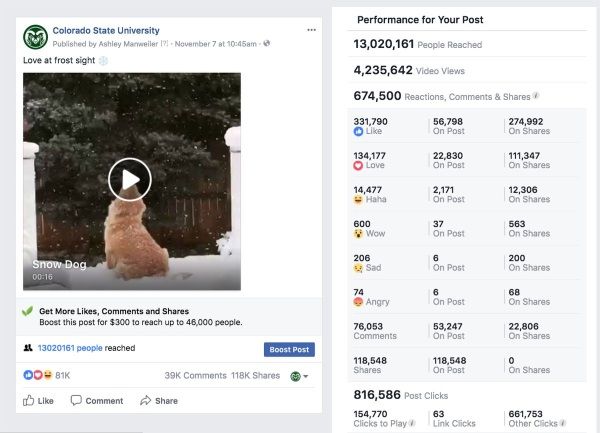 Pretty good going for a simple video of a dog enjoying the snow! It got us thinking about other college and universities experiences of going viral? We would love to hear what’s the most viral you’ve ever gone! Send us your viral stories to marketing@terminalfour.com or let us know in the comments below!