Despite the festive break, the last few months have seen numerous developments and changes in the world of social media.

Here, in our latest installment of social media news we cover some interesting new Twitter and Instagram developments, and stories affecting other platforms to consider for your social media strategy, campaigns and communications.

Twitter announced in a presentation at CES earlier this month, that they are testing a new feature that will give you more control over who will receive your tweets.

The new feature will be tested over the coming months and will allow users to select between four different settings for replies - Global, where anyone can respond; Group (allowing only replies from people the user follows or mentions), Panel (replies from people mentioned), and finally an option to prevent replies completely for a designated tweet.

Whilst we would always advocate for transparency on social media, the extra control could be valuable in helping institutions publish tweets on more sensitive topics and themes in a more controlled way. Testing began back in 2018 but now Twitter has rolled out it's Promoted Trend Spotlight ad functionality in the US, UK, and Japan.

The ads appear at the top of the explore tab for the first two visits, per user, per day, and supports a 6-second video format and GIFs as well as static images.

If your institution already engages in Twitter advertising it could be worth experimenting with this new format. In a recent viewability study from EyeSee, Promoted Trends Spotlight ads generated 113% higher ad recall and 18% higher brand consideration. And users were three times more likely to click through from an ad in the Spotlight unit than the standard Promoted Trend area.

Another feature coming to Twitter this year is a threaded conversation view that you're no doubt familiar with if you use Google mail. Their goal is to put full conversations 'on one screen'.

This new conversation interface has already been through a beta trial period and will be coming to the main Twitter app in the coming months. 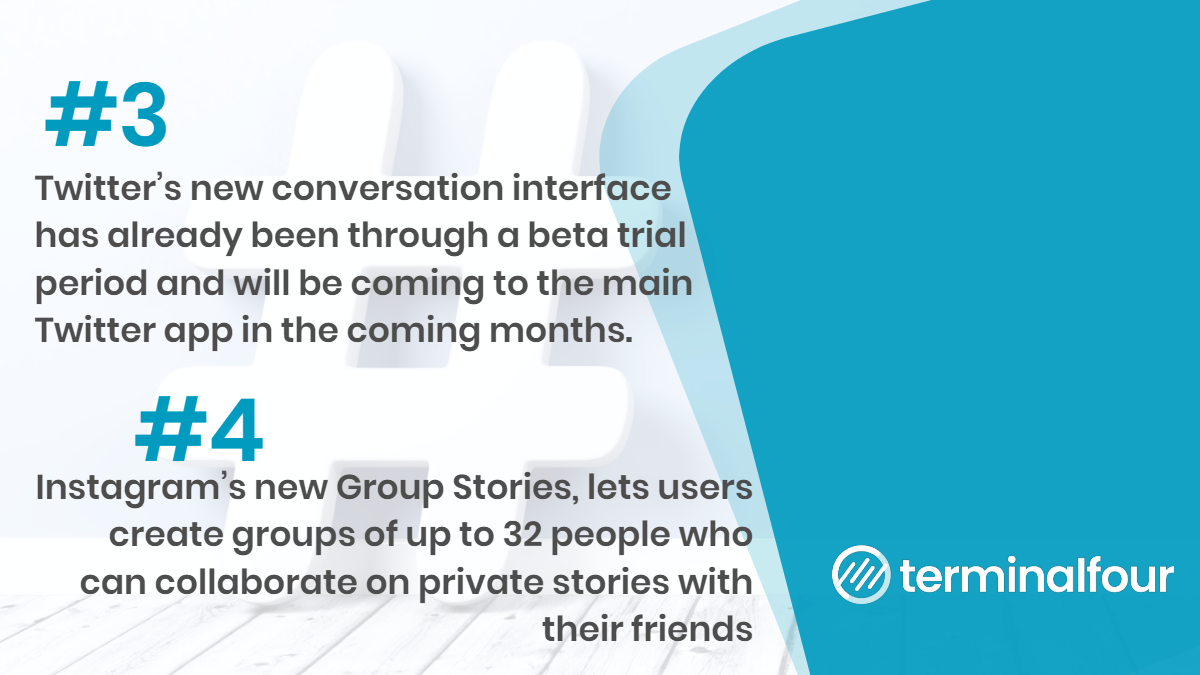 Instagram has begun rolling out another Stories feature. The new Group Stories functionality lets users create groups of up to 32 people who can then collaborate on private stories with their friends. This fits neatly with Instagram group chat, providing another way to engage and interact with group members.

Institutions can now set a minimum age for content on Instagram and this can be tailored by country. It comes as part of Instagram's efforts to restrict inappropriate content to protect younger audiences.

For most institutions, content will already be tightly controlled but this extra measure could be helpful so that all the content in the social calendar is received by audiences at an appropriate age. A new dashboard for Instagram is going to help influencers to find brands, manage deals and share insights with those they work with.

With Instagram in the process of removing the 'likes' feature from posts on a region by region basis, a dashboard like this could be even more useful both for entrepreneurial influencers and institutions connecting with them to promote their university.

TikTok is investigating the possibility of a curated content stream, similar to SnapChat's Discover area. The news comes as the social platform that experienced explosive growth last year tries to address advertiser concerns around ad placement alongside controversial content.

The Discover page looks like it will display original video content from popular TikTok creators, alongside content from professional publishers, broken down in a list of topics such as Gaming, Sports, Art, and Pop Culture.

The additional layer of curation will give TikTok moderators more control, ensuring that advertisers don't end up having their ads in close proximity to potentially controversial content. It looks like Linkedin Groups may make a comeback in 2020. Once a key feature of the app, Linkedin Groups lost user focus and unfortunately became obsolete some time ago, amid problems with spam and excessive volumes of communication. Now, Linkedin has announced a range of features aimed at providing more control for group administrators.

Linkedin Groups isn't yet back but keep a lookout for the functionality which will potentially re-launch this year.

#9 Snapchat starts the year with a blackout

Snapchat didn't get off to a good start this year, with an outage reported by tens of thousands of people across the world. It led to the term 'Snapchat down' trending across social media as users tried to understand what was wrong.

It's not the first time there have been issues with the app in recent months, with another major outage taking place only last October. And you may be surprised to hear that Pinterest is now the third-largest social media platform in the United States. The data comes from eMarketer's latest research, which saw Pinterest ending 2019 with 82.4 million users in the US.

Pinterest managed to surpass Snapchat's 80.2 million users, which is notable considering Snapchat's userbase has been larger than Pinterest's in recent years. Researchers are predicting the platform will continue to stay ahead of Snapchat. Is this the year to commit to delivering more institution content on Pinterest?

According to the survey the topics that will dominate and have the greatest influence on this year's marketing strategies will be data (privacy, consumer control and ethical internet activity), environmental (conscious consumption and sustainability), low attention and changing social media habits (digital detoxing and focus), and diversity and wellness (mental health, self-care, and stress-busting measures).

With data, security, and ethics featuring so prominently in consumer's minds, it's no surprise perhaps that the social media functionality changes we've discovered and covered here relate largely to measures to improve the control of content for publishers.

This could be the year social media really cleans up its act, and institutions stand to benefit.