Like higher education, there is lots happening in the world of social media and it can be hard to catch every story or filter them for the truly important updates.

Following the success of our first installment back in September, we've compiled another round-up of news items from recent weeks that may impact your social media activity.

Here are five new updates you can factor into your institution's social strategy, campaigns and communications.

Firstly in the US and now globally, it seems that the platform is doubling down on the idea that hiding 'like' counts is the thing that will magically make using Instagram healthier for everyone.

Instagram has not fully rolled out the changes but it is continuing to run tests across countries.

Likes are the currency of social media. And so whilst the removal of this feature on Instagram is designed to improve the lives of consumers, influencers are starting to feel the impact of the change on their accounts and their brands and some have found their content is getting much less reach than before.

Testing continues so watch this space.

Key take away: Instagram has potentially made itself a more accepting place by removing likes. This might appeal to Gen-Z but for social influencers, it's a potentially damaging move. The change would also potentially make a more level playing field for institutions and raise the value of comments on posts.

In another expansion to the Facebook ecosystem Mark Zuckerberg recently announced Facebook Pay, which will begin to roll out in the coming weeks.

The new service is designed to facilitate payments across Facebook's popular social networks, including Facebook, Messenger, Instagram, and WhatsApp. Initially, it will be available for fundraisers, person-to-person payments, event tickets, in-game purchases and those from pages and businesses that operate on Facebook's Marketplace.

Could this be another payment channel to bring added convenience to students' payments for library services, food, and other services on-campus? Perhaps. But students will need to become comfortable with ad targeting based on their actual purchases through the platform.

Key take away: The new payment service is not to be confused with Facebook's new Calibra wallet and Libra cryptocurrency. Meanwhile, Google has announced it is following the likes of Apple and Facebook and also launching its own bank, this time called 'Cache'. The big players in social media and search want to get closer to your purchase data too. 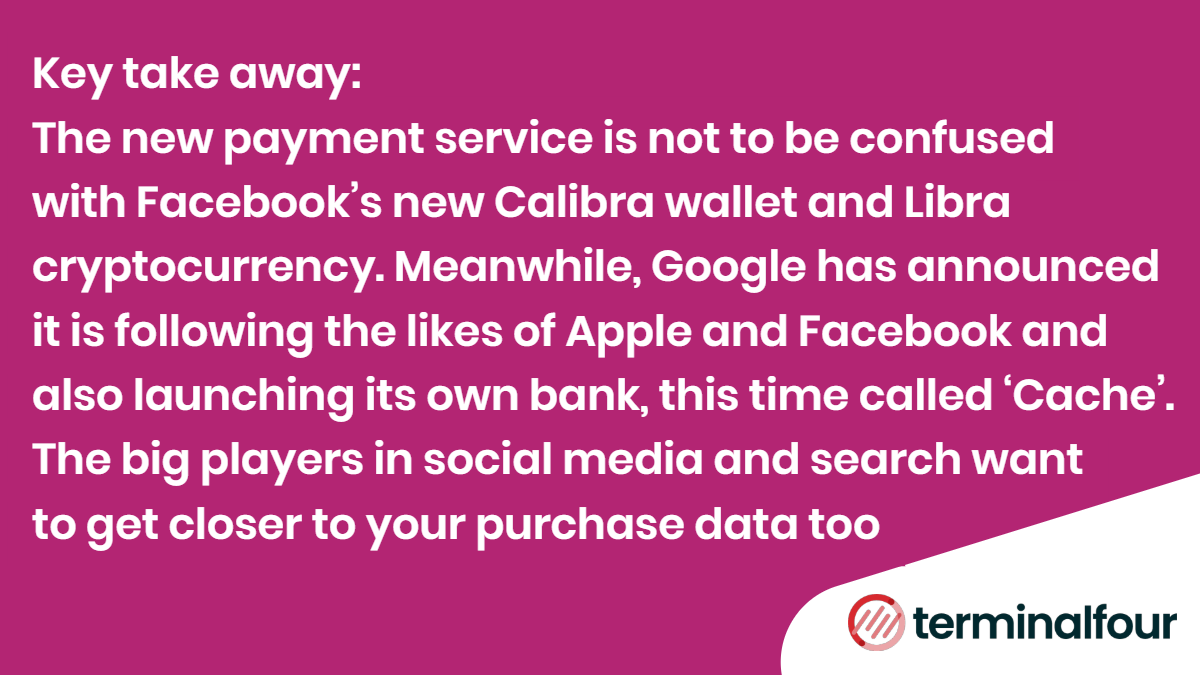 Facebook has launched its own answer to TikTok. In Brazil! Reels (aka Cenas) offers the functionality to make 15-second video clips set to music and share them as Stories, with the potential to go viral on a new Top Reels section of Explore.

Sounds familiar? Just like TikTok, users can soundtrack their Reels with a huge catalog of music, or borrow the audio from anyone else's video to create a remix of their meme or joke.

However, TikTok is all about acting ridiculously and making people smile. That's quite different from the carefully manicured images many Instagram users try to project. It could feel counter-intuitively more awkward to perform comedy in front of your real friends and fans than it does on a dedicated world stage at TikTok.

Only time will tell how widely Reels is rolled out, but meanwhile, TikTok just hit 1.5 billion downloads.

Key take away: TikTok is a hugely popular platform for students and institutions are beginning to experiment and engage more on it. Reels is Facebook's answer to TikTok and might become popular very quickly given the convenience of having the functionality within the Facebook app. Facebook is rolling out new advertising features that use machine learning to dynamically customize ads for individual users.

This will give advertisers the ability to serve personalized ads when they may otherwise lack the time and resources required to deliver personally relevant ad experiences.

For example, if a user is found to prefer carousels over catalogs based on their previous activity, then that's the format they'll be delivered.

In an announcement, the company stated: "Facebook machine learning combines data and signals from our platform, with insights you share, in order to make predictions for who the right people are for a given message. As people take different actions on and off Facebook, it creates intent signals that help us deliver a more tailored ad experience. We can do this for both organic and paid content."

Key take away: Dynamic ads deliver an added level of sophistication to an institution's advertising activity. For example, using a new 'add language feature, institutions will be able to deliver ads to students with messages translated in the local language. Advertisers will be able to review translations or provide their own if they prefer.

Facebook has always been afraid of losing a connection with younger generations. In its latest move to keep Gen-Z active on the platform, a new app called Whale has launched (although initially only in Canada).

Whale enables users to create their own memes with simplified templates and tools.

To use Whale, you first pick an image you want to use as your template - either your own or from the stock library. You can then add text, emojis, and filters to turn your image into a meme. You can then save and share the image to various social networks directly from the app.

Key take away: The functionality is fairly basic, but it may work as a means to help more people get involved in meme trends. If Whale offers up the latest meme templates, and simple ways for users to add their own spin, that could come in handy, and it could gain traction among younger user groups. Thanks for reading! We're always on the look-out for interesting social media updates so if you've spotted anything new or if you have incorporated new functionality in your institution's social activity we'd love to hear from you.