If we were asked to sum up Reddit to someone who had never heard of it before, we would say that Reddit represents the best and worst of the internet. It's the place where people unite to solve crimes, share comforting videos of their pets, pass on information, learn about society and just be part of the internet. 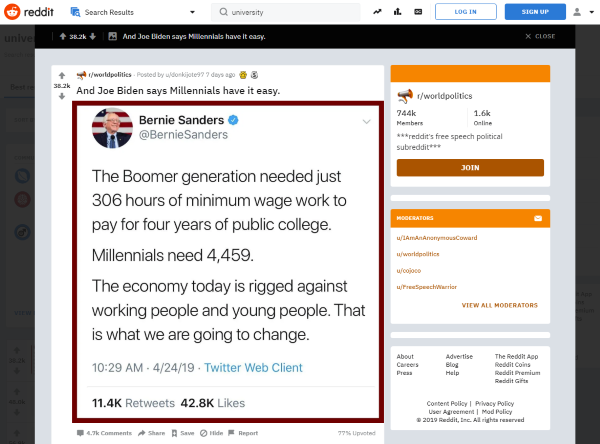 Reddit is one of the most visited websites in the world. As of 2018, it had over 138,000 active communities (subreddits) organized around almost any topic imaginable.

It's made up of a community where the focus is firmly on the content, not the contributor. Sure, there are the infamous AMAs (Ask Me Anything) with people like Barack Obama or Bill Gates, but some of the most popular threads feature real people with interesting jobs or ordinary people who have experienced the extraordinary. Some of the most popular AMAs ever include: a former 911 Operator and I am a 5 year McDonalds employee. 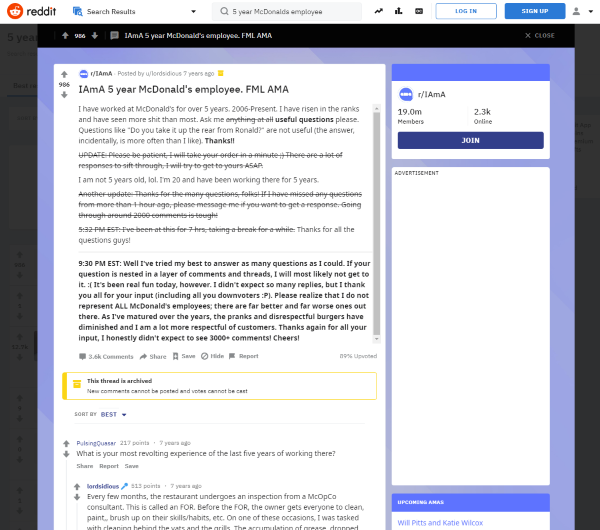 What this shows is that if you have something interesting to say, then you're in luck! Reddit has a large ready-made audience that wants to hear it.
We have always known of the enormous opportunities that exist for higher education institutions on Reddit; from sharing the latest research to engaging with students who are considering their university options. The possibilities are endless. The trouble was (and still is) that most universities and colleges aren't using Reddit. It's not as easy to carve out your own corner on Reddit as it is to on Facebook or Instagram but if you do the results can be incredible.

A few weeks back, CASE Europe Social Media & Community Conference 2019 took place in Brighton, and we were intrigued to see a discussion take place between members of Imperial College London, Cardiff University and the University of Reading around the successes and failures of Higher Ed communities on Reddit. The presenters took the audience through how and why they failed and then learned to succeed at Reddit. This session got us really thinking about Reddit over the past weeks, and as a result, we have outlined some of our key takeaways below:

One of the best ways to get involved in Reddit is to be a tourist for a while. Don't even dream about posting until you understand the lay of the land first. Begin by identifying the subreddits that are relevant to you and subscribe to the relevant ones. Knowing where your audiences are will make it a lot easier when it comes time to share content. Also, make sure you understand the rules of Reddit and most importantly don't just shamelessly self-promote (It's not only frowned upon, but you will also be banished!).

Decide who you want to reach.

The same goes for any platform you're considering joining. Unless you know what target audience you want to reach and what message you get across, then it's all kind of pointless. One popular avenue with Higher Ed Reddit users is to promote research to an audience interested in science. For instance, Florida International University hosted an AMA back in 2015 featuring a professor of infectious diseases at FIU's College of Medicine who had spent a month in West Africa treating Ebola patients. The University recorded more than 1,000 upvotes and 300 comments within the first 24 hours. 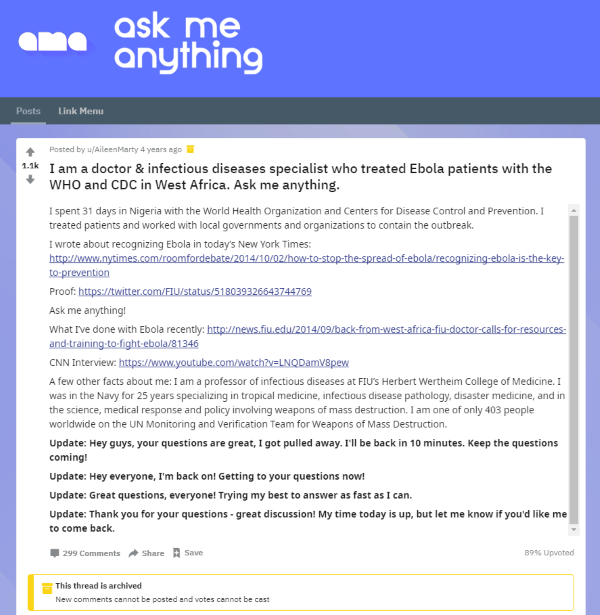 Sourcing the right content is the real challenge with Reddit. Reddit users don't care who you are so if your content doesn't cut it, you will know almost straight away. Got a fascinating research story? How about a fact about a little-known moment in history that happened on your campus or maybe even an AMA with your mascot about what it's really like to wear a giant tiger costume? Taking the time to find out what your audience is interested in will help you reach that coveted first page.

You will fail often, but you will succeed too.

Oh and remember, nobody gets it right on Reddit all the time. It just doesn't happen. But, the more active you are on Reddit, the more research you do, the more natural it will all become. You will be hosting AMAs and upvoting comments before you know it.

If you're looking for some Reddit inspiration, do take a look at the fantastic work done by Imperial College, Cardiff University and the University of Reading.
And let us know, does your university use Reddit?