Snapchat Stories and Northeastern's #nuexperience around the globe As marketers, digital innovators and self-confessed tech nerds, we all know that higher education is one of the most exciting places to work in. There's so much room to think outside the box and try new ways to engage with your audience. At the end of May, the PR News Social Media Awards took place in New York. The annual awards serve to recognize the best social media teams, digital leaders and the year's best social media campaigns across Facebook, Twitter, Instagram, YouTube and Snapchat, plus unique blogs and infographics. 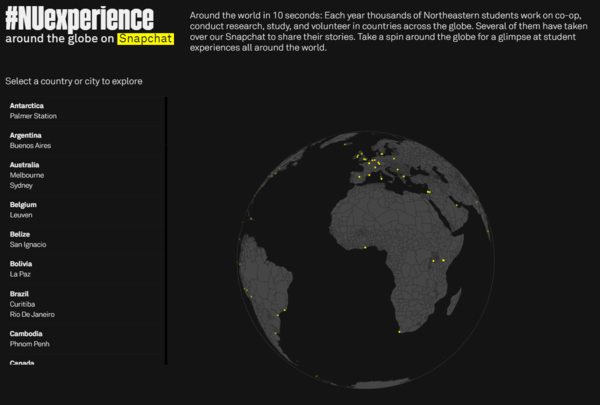 One of the big winners on the day were Northeastern University who won best Snapchat Campaign for their Global Snapchat Takeover Map. We have to say, we love this campaign. It really shows the potential range of a university's digital reach. The premise of the campaign is straightforward; each year thousands of Northeastern University students travel around the globe for work experience, research, study and to volunteer. The university's digital team asked some of these students to take over the university's snapchat and showcase their international experiences. The snapchat stories were all downloaded and organized into a map which is searchable by country and city. Visitors to this web page can see the name of the student, their reason for travel and a video of their Snapchat story. Countries and regions all over the globe are represented from Argentina to Uganda and there are some incredible stories featured. This is such a genius way to promote the possibilities and opportunities available to Northeastern University students.

To spin the globe and view the snapchat #nuexperience visit the website: https://news.northeastern.edu/2017/06/27/nuexperience-around-the-globe-on-snapchat/#loaded