Science and a good story: UK Scientists simulate the climate of Game of Thrones We have written before about how storytelling and the promotion of research is something that universities are increasingly investing in. Crafting a story around scientific research, instead of relying on the data, mightn't seem like the obvious approach but in terms of its promotion it's often the most effective.

Talking about scientific research in relation to topics that are of interest to the wider public will help ensure that relevant media, investors and researchers hear about it. 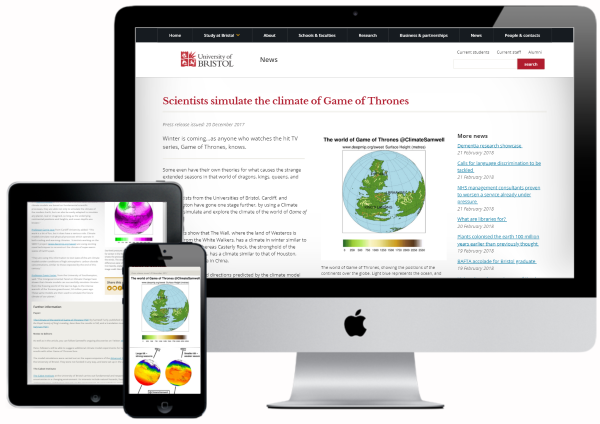 Take for example, Game of Thrones, who wouldn't want to read a scientific article about the most talked about TV show of all time? Anyone who watches Game of Thrones will know that the seasons in the continents of Westeros and Essos tends to be somewhat chaotic. Ever since, Ned Stark gave his weather warning "winter is coming" back in season one, the weather has been a constant theme. With extended and unpredictable seasons that can last for years, it's been impossible to relate the climate to our world. That is until now!

Researchers from the Universities of Bristol, Cardiff and Southampton have used a climate model to simulate and explore the climate of the world of Game of Thrones. Their twitter account is also well worth checking out @ClimateSamwell

The results transpire perfectly to the art of storytelling. The Wall, where the land of Westeros is guarded from the White Walkers has a climate in winter similar to Lapland while the climate of Casterly Rock, the stronghold of the Lannister's, is similar to Houston Texas, and Changsha in China.  The research was picked up by world class outlets such as The Guardian, Ars Technia, Space.com, The Independant and Esquire as well as the Daily Mail.

The results show that the extended seasons can be explained by a tumbling of the tilt of the spinning axis of the planet as it orbits around the sun in a precise way that means the same hemisphere always tilts towards the sun.

While the project does have a fun side, it also shows how climate models "simulate real physical processes which operate in both cooling and warming climates." (Professor Carrie Lear, Cardiff University) For instance, it could be used to recreate climate conditions of high atmospheric carbon dioxide concentrations which we could expect to become reality by the end of the century.

You can read the full "The Climate of the world of Game of Thrones" report in English, Dothraki and High Valyrian. The story behind the research is also available.

How is your university using storytelling to promote research? Email us at marketing@terminalfour.com and let us know!