Sometimes opportunities don't come knocking, you have to get proactive. How many times, do you come across something online and think…I wish I'd thought of that or I would have done that better? In this world of digital marketing and social media viral threads you have to be quick to react. Success isn’t always guaranteed but sometimes, every once in a while, you'll stumble across something that's a winner.

Last August, University of Hull, launched a campaign to find a disappointed student who had opened his A-level results live on the Good Morning Britain TV show only to discover he hadn't gotten what he wanted. 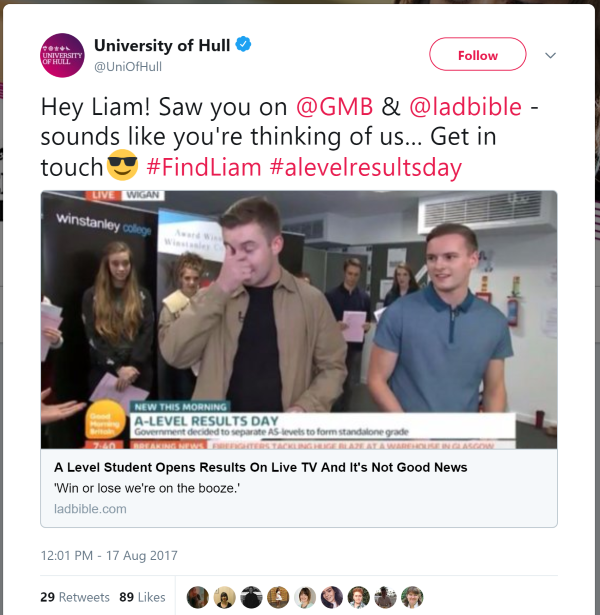 According to ITV; "Liam Scroggie was opening his results on air this morning at Winstanley College in Wigan. He wanted to study politics at Queen's University and needed to get an A and two B's to do so. Unfortunately, as he opened his results, alongside his friend Joe Sylvester, he did not get the grades he needed and was going to look towards his other option of Hull."

Before long, the University of Hull had sprung into action, launching a campaign with this tweet that used the hashtag #FindLiam.

Liam soon replied saying he had accepted his place and could not wait to start in September.

There are a few lessons to learn from this story.

Number 1, NEVER open the results to anything live on television. Just don’t do it.

Number 2, social listening does work! This campaign happened because a university staff member happened to see the feature on Good Morning Britain and saw an opportunity. I cannot count the amount of times, someone has emailed or text me something they have stumbled across and said;" hey do you think we could do this…would it work?" Sometimes, you won't have any success but every once in a while, you'll have a hit on your hands!  Don't be afraid to take risks, be bold and most of all encourage your staff to do so too.

Number 3, act quickly having procedures that allow you to move forward without internal "red tape"

What's the best thing you've ever tweeted to engage a potential student? Let us know!