Every day, over 4 billion views happen on Facebook. It remains one of the most important social media platforms to businesses around the globe. Worldwide, Facebook reports that there are over 2.32 billion monthly active users as of December 31, 2018. This is a 9% increase in Facebook monthly active users year on year.

We often come across articles and conversations around whether or not Facebook is still a viable platform. Is it dying off? Do you have to pay to get your posts seen? Are younger audiences still using Facebook? The questions remain, but the fact is, the figures don’t lie; Facebook is still one of the most important social media platforms businesses have at their disposal. 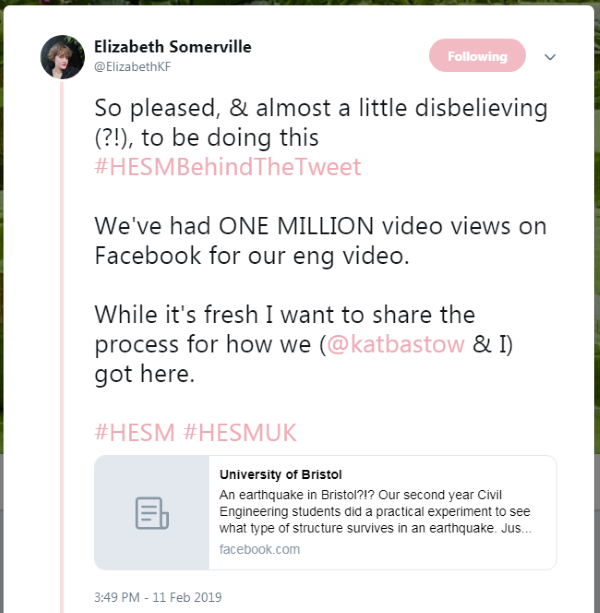 On Twitter the other day, we came across a thread from Elizabeth Somerville, social media manager for the University of Bristol. She was sharing insights into how her team shared a video on Facebook and got over 1 million views! She shared the strategy that she and Kat Bastow put in place to achieve this which we think will be of benefit to anyone working in marketing.

Behind the scenes of a viral video

She was approached by a team member with footage of a simulated earthquake, and she instantly knew she had something special on her hands. How did she know this? She knew that short footage showing something "odd or newsworthy with an engaging first 2 seconds" performs well on Facebook. In her thread, she pointed out that she's always on the lookout for video footage that meets this criterion: Hooks you straight away and newsworthy enough to share.

One of the most important steps to help your video on the way to going viral is production. Elizabeth worked with the creator of the video to edit it down to just over 1 minute. Most importantly, they chose an engaging opening 2 seconds to ensure viewers were hooked. She then wrote an engaging post to accompany it using all the data they had inquired. Crucially, they sent the video to key influencers they had identified in the field of Engineering and asked for their help in sharing it in the "all-important first 24 hours".

And guess what, their hard work paid off. In a short time, the video amassed: