College of Charleston - Total Eclipse of the Campus

Those of us not fortunate enough to be living Stateside last month, were left with serious FOMO (fear of missing out) as the US went dark for the most fleeting of moments. For the first time since 1918, an eclipse travelled across the United States and gave those fortunate enough to have the right weather conditions, quite a show. The resulting media coverage was spectacular with pretty much everyone, from brands to major celebrities- eager to share their eclipse experience.

We decided to showcase how the College of Charleston made the most of the eclipse to not only celebrate welcome day but also get themselves featured in the NY Times, were broadcast in Times Square and featured on NASA TV. Oh, and did we mention, Bill Murray even casually dropped by the campus to watch the NASA talk. 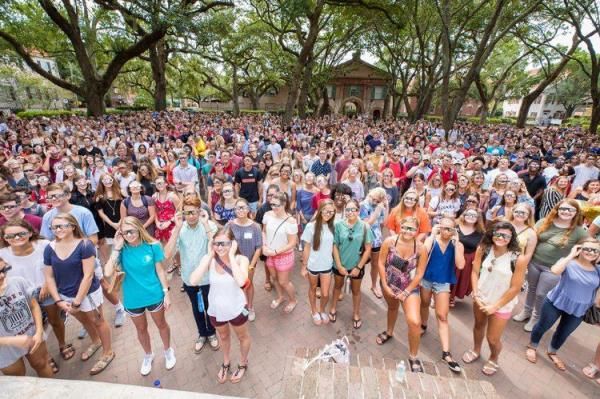 A rare event like the solar eclipse really demonstrates why it’s important to not only mark these memorable occasions in your social media and digital marketing calendar but also to plan how to make them work for you.

Fortuitously, the solar eclipse coincided with the arrival of the incoming class of 2017 - an unforgettable way to begin their college journey.

Here are just some of the highlights from the college of Charleston convocation/eclipse day:

Bill Murray and his brother Brian stopped by @CofC for the @nasa talk with scientist Paul Hertz and Prof. Jon Hakkila. #cofceclipse pic.twitter.com/6a8Bt8tMMt